Costa Rica Whale Watching Tour Guide: Where To Go When

What is it about whales? Is it their massive size? Their incredible intelligence? Their social personalities that seem remarkably similar to ours? Whatever it is, they intrigue us. We are drawn to them. And there is no place like Costa Rica for whale watching. Costa Rica has the longest humpback whale season in the world. So if you are looking for an encounter with the ocean’s gentle giants, your odds are pretty good here.

Costa Rica has the longest humpback whale season in the world! This gives whale watchers a lot of flexibility as humpback whales can be seen nearly year-round on the Pacific side. The Northern Hemisphere California Humpback Whales come to the Pacific coast December – early April. Southern Hemisphere Antarctic Humpback Whales come late July – November. The Southern Hemisphere Antarctic Humpbacks migrate in groups of about twelve for nearly 5,000 miles to mate and return to give birth in the warm, tropical waters of Costa Rica. If you’d like to see whales on the Caribbean side, head to Tortuguero where the North Atlantic St. Lawrence Humpback whales come from December – March.

While it is possible to see whales all along the Pacific coast and northern Caribbean Coast near Tortuguero, they appear in the largest concentrations along the South Pacific coast and the Osa Peninsula. Whale watching tours and snorkeling excursions are your best bets to see them. 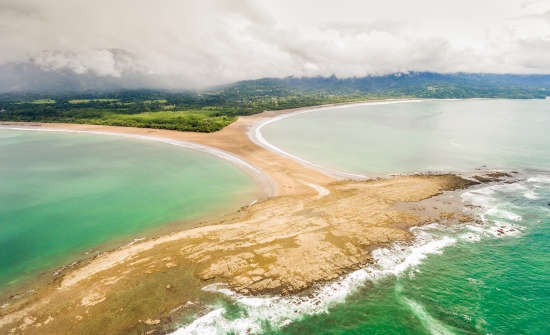 Situated on the South Pacific coast of Costa Rica, Ballena Marine National Park is the destination that comes to mind first for many Costa Rican whale watchers. The park is named for the Pacific humpback whales that return to these warm coastal waters annually to breed. Perhaps the most puzzling natural phenomenon of the park is the Whale’s Tail sandbar. Yes, it’s crazy but true. At low tide, the water retreats to reveal a sandbar in the shape of a whale’s tail. Coincidence? Whale never know. Whale watching tours can be booked from Uvita. Whale watching season in Marino Ballena National Park is during the winter months from August to April. Although, it is said that the best time to see whales is from August to October. You are likely to see plenty of other marine life such as sea turtles and dolphins here as well. 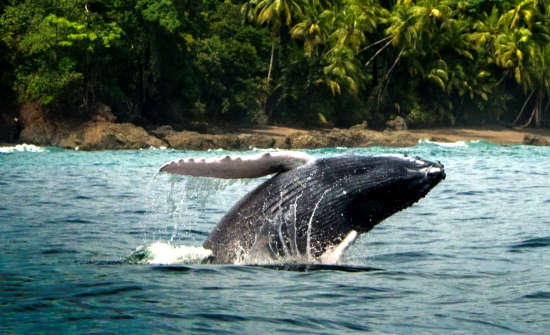 Whales and dolphins are commonly seen in the calm waters of Drake Bay on the northern side of the Osa Peninsula. This shallow, protected bay is the perfect place for mother whales to raise their young calf after a twelve month gestation period before introducing them to the rest of the ocean world. If you are lucky enough to see a whale, look closely to see if it is a mother with her young. Many whale and dolphin tours leave from the Drake Bay on the Osa Peninsula. Nearly all the hotels in the area can arrange day tours. 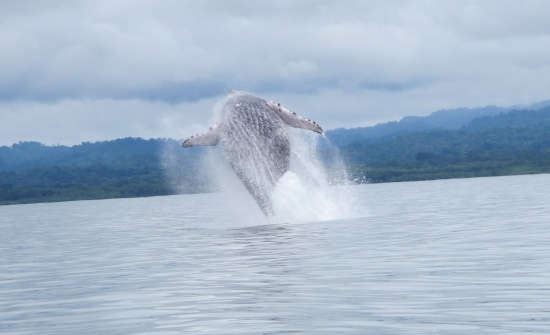 The Golfo Dulce is a tropical fjord stretching out between the Osa Peninsula and Piedras Blancas National Park. The Gulf is another popular whale breeding destination for its shallow, protected waters. These warm tropical waters are an especially whalecome retreat for Antarctic whales. The Southern Antarctic Humpback Whales are the most frequently seen species on the Gulfo Dulce. Nearly all of the hotels in the area can arrange whale and dolphin tours here.

Located on the North Pacific coast of Costa Rica in the Guanacaste province, the protected Papagayo Bay seems to be an up and coming destination for whales. They have been spotted in Papagayo Bay more frequently in recent years. The two main hotels on the Papagayo Peninsula are the Four Seasons Resort and Andaz Papagayo Resort. Boat excursion can be arranged from both.

Manuel Antonio National Park is a popular destination on the Central Pacific coast of Costa Rica where the dense rainforest meets golden sand beaches. For many, Manuel Antonio conjures up images of monkeys, but let’s not forget the park’s underwater inhabitants. These are whale waters! Whale and dolphin tours can be booked from the Manuel Antonio and Quepos region. Not to mention, it’s a great way to explore the park from a unique vantage point.

A whale’s tail is their fingerprint. Each whale has a unique display of markings unique to them.